Focusing on popularization and application of green energy such as wind and solar energy, 2019 REI was held in the capital of India–New Delhi on September 18th-20th. As a leading international PV inverter brand, Senergy, a Chinese solar inverter manufacturer company, has shown on the expo for 3 consecutive years, exhibiting its PV inverter on-grid and hybrid products represented by the new-generation SE series, which are solutions that can be widely used in industries and business, as well as households.

Located in the latitude with richest sun radiation, India is one of the countries with the most development potential in solar energy (with annual productivity of 1700~1900kWh/kWp). Meanwhile, with fast economic growth in recent years, India, boasting the 2nd largest population in the world, has grown into the 3rd market for PV installation, and the one highly dependent on Chinese PV products. According to statistics, the amount of PV components imported from China was 8.204GW in 2018, there is no doubt that China has become India’s largest exporting country in PV components, while Senergy is one of China’s most representative companies in PV inverter.

As the first batch of leading Chinese PV inverter enterprises going abroad, Senergy has shown on REI for three consecutive years. This year, it exhibited its top-notch SE series products on-grid PV inverter (1-60kW) on its booth featured by simplicity and high-class, as well as PV intelligent cloud system and automatic production in factories, attracting a large number of old and new customers for consulting and negotiating. 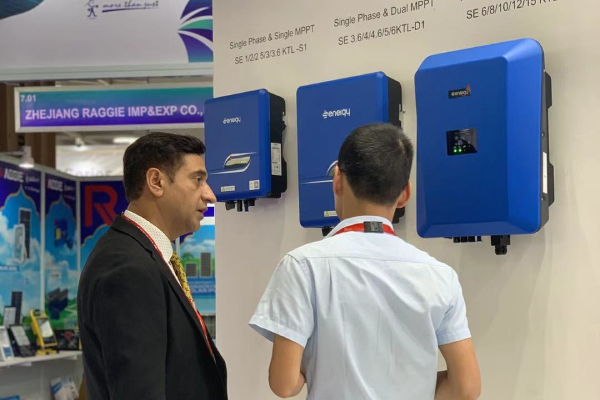 In particular, through its interactive inverter factory live-action of automatic production, the full picture of its production base in Shenzhen can be seen clearly: Here, equipped with the most advanced and highly automatic production equipment in the world, including dozens of large-scale Panasonic SMD automatic mounter, AI fully-automatic horizontal and vertical plug-in devices and several industry-leading robotic welding equipment, it can realize automatic manufacturing covering the entire industry chain processing line from plate-making, assembly, testing to aging, praised by many Indian customers who have visited the factory in Shenzhen, while convincing new customers with the scenes in exhibition.

With continuous exploration, the future of Indian market is bright

“Through exhibiting in REI in 2017 for the 1st time, we discovered great needs of the Indian in PV inverters, making us resolute in exploring Indian market”, a person-in-charge said. It was exactly from the year 2017 that Senergy began to become a frequent exhibitor in REI.

The reason is simple, India, with a population of more than 13 billion, its per capita energy-consuming accounts for only 38% of the world average due to the fact that tens of thousands of households are still in shortage of grid connection, determining rapid increase of its energy needs in the next ten years.

“With continuous increase of solar energy devices in business and industries, the share of its string inverters with relatively low price will increase, which is the segment our company is good at” a person-in-charge spoke frankly.

As a company with 16-year experience in R & D of products and technology of PV inverters, Senergy has always been sensitive to the international market. Especially as the plan of 100GW PV installation to be accomplished in the year 2022, Senergy regards India as a market with great potential.

Senergy Sets Off to A Bigger Global Stage
Scroll to top